I still have conversations with people who think that traditional media such as TV and radio are not being disrupted by social media. My contention is that, increasingly, and particularly in the case of radio, people are consuming media via apps on mobile devices, and that this means that they see TV and radio as one of many apps.

And here is a little illustration. Earlier today, the BBC cricket correspondent, Jonathan Agnew, was surprised to find that, as he attempted to hand over to a report on the Lancashire v. Durham County Championship match, he was interrupted by colleague Simon Mann, to be told that there had been a change of plan, and that there was now to be a feature celebrating “Aggers'” 300th Test Match as a commentator, and 25 years as Cricket Correspondent. As the clips of his commentating highlights faded out, Sir Michael Parkinson then took to the airwaves to begin an interview with him.

What made this different was that, anyone who had “liked” BBC Test Match Special’s Facebook Page would have been let into the secret before Aggers, as Sir Michael’s entry into the Engineering Room was being live streamed via Facebook Live with a commentary by a member of the team. So, while radio listeners were hearing Aggers carrying on on air, oblivious, Facebook users knew he was about to be knocked out of his stride.

What this means to me is that “broadcasting” is no longer linear. While the backroom scenes being streamed via Facebook were not officially part of the programme, they were a vital piece of information about what came next. And, as the Facebook Live camera moved into the actual commentary box, there was then a choice for anyone with a smart mobile device, either to continue just listening to the interview, or to switch to Facebook and see the interview with pictures. Thus the programme was available, on mobile devices, either via the BBC iPlayer Radio app (or others such as Tunein), or via Facebook. It’s a question of switching apps.

I know it’s a long way off, but we are heading closer to the day when mainstream broadcasting is simply one of many apps to chose from. 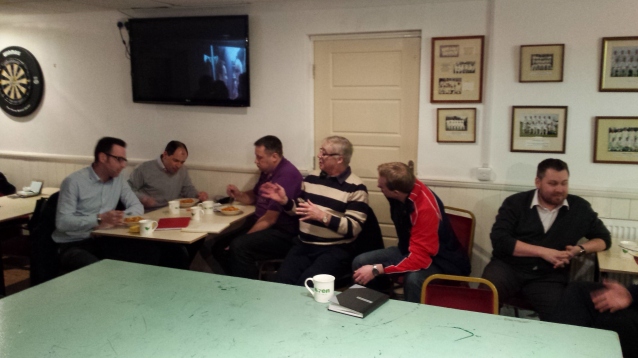 This week was the second Workshop in the Bradford element of the Cricket and Social Media project I am undertaking with the England & Wales Cricket Board (ECB). 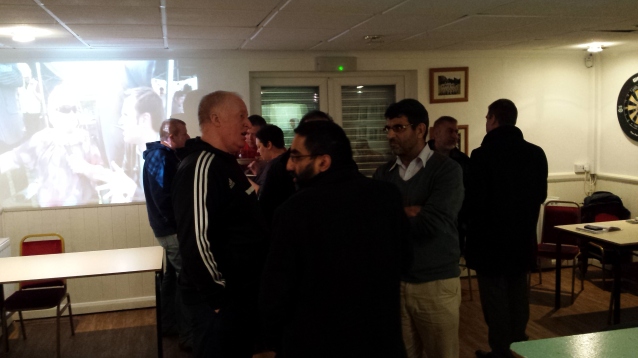 Towards the end of the workshop, I asked attendees to suggest their favourite cricketing stories. One person said, “well we did have a naked cricket match at our club once”. That was unexpected, and caused a fair degree of hilarity in the group. 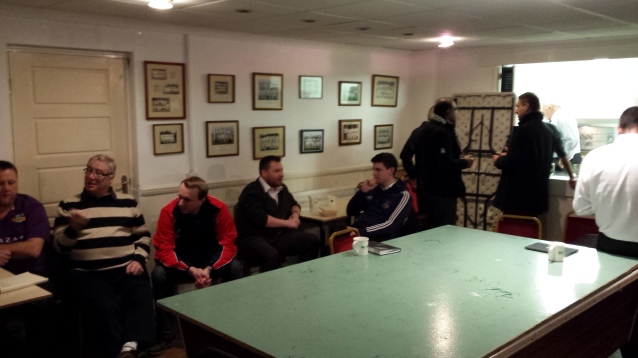 I’d like to thank Colin Beveridge for tracking down the Daily Telegraph report of the match for me. Just goes to show, you can never predict what kinds of stories you are going to uncover. 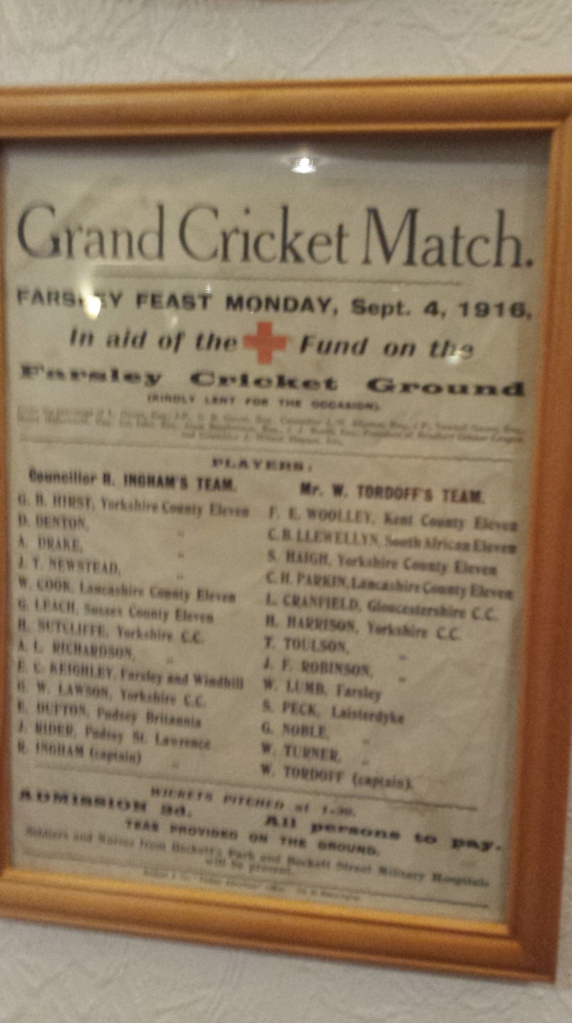 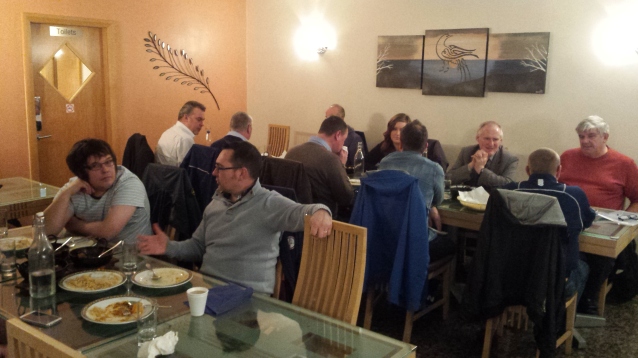 Last night was the first Huddersfield session in the  Cricket and Social Media project I am running with the ECB (England and Wales Cricket Board). When I devised the format for these workshops I borrowed the idea of kicking off with a discussion over a curry from the Social Care Curry movement.

So the Huddersfield workshops began at Saims Restaurant. And, judging from what people said at the end, and on twitter later on, it proved to be a great success. 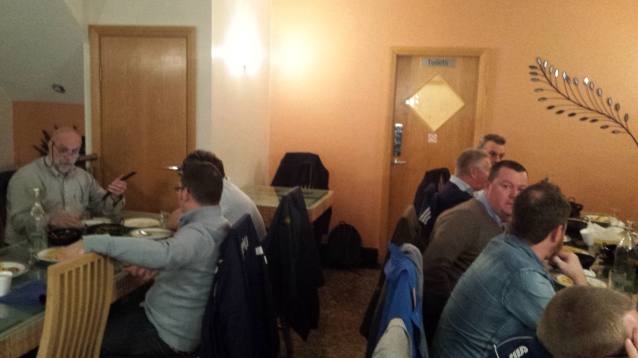 This proves my theory that food is a great facilitator for conversations. Now all I need to do is to persuade all my clients to build a curry into every project I do. 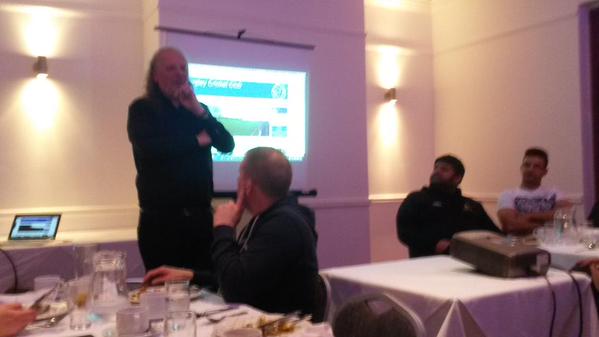 Last night was the first session of the Cricket & Social Media work I am doing with the ECB (England & Wales Cricket Board). I’m running 3 social media workshops for people involved in local cricket clubs and leagues in each of Bradford and Huddersfield. The intention of this work is to ensure that those who play cricket regularly can make the most of social media to engage those who might be casual players, in danger of dropping out, or not know where to go to join a club. 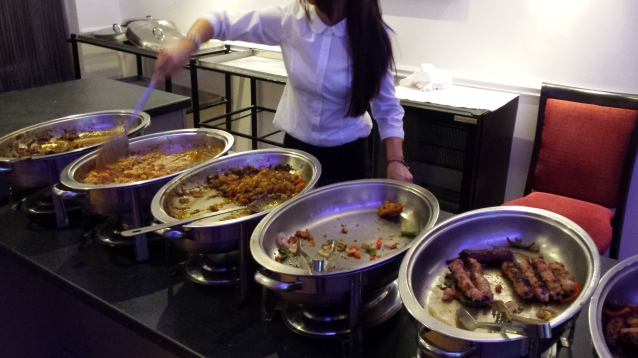 The first session in each location takes place over a curry as a convivial start to the process which breaks the ice and gets the conversation flowing. And last night’s event, held at Omar Khan’s restaurant in Bradford proved to be a great kick off to the process. We had 25 people in attendance, from a wide variety of clubs, and the conversation was wide-ranging. It was evident that some people are already making use of social media, and there is much to build on in terms of experience, content, enthusiasm and ideas. There are so many benefits to be had from regular involvement in the game, and, over the next few weeks, we are working out the best ways to promote and sell these benefits to those who might be undecided about them. 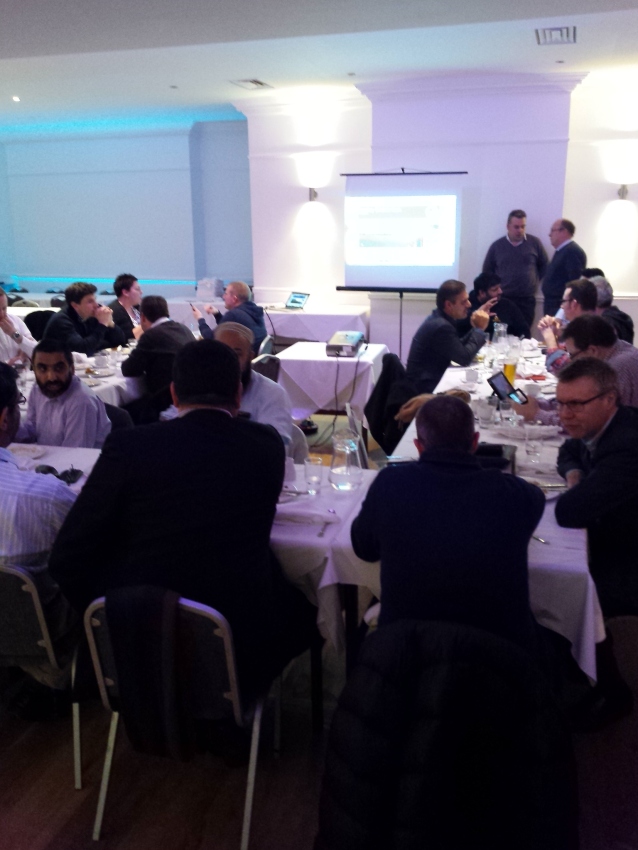 A key issue which came out of last night’s session was how to discourage people from inappropriate “banter” on public fora associated with the clubs. This kind of thing is a minority activity, but nonetheless important for clubs who are trying to build and maintain their reputation, and, in particular, who are trying to attract young people to get involved. And this presents particular issues for clubs whose members are volunteers and not in a position to monitor what takes place in their social media spaces 24 hours a day. Cricket clubs are essentially communities, and one our key aims in this initiative to extend this community spirit into online spaces. 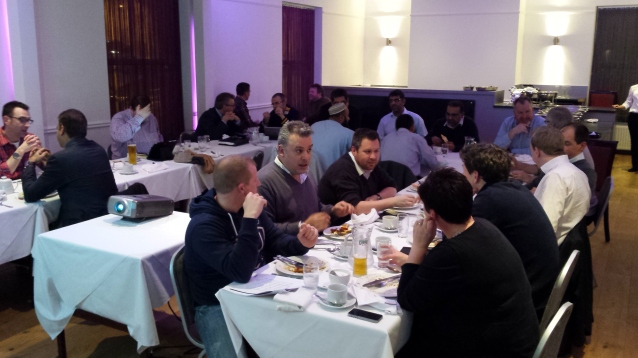 I think we’ve made a great start on this process, and I look forward to telling you more about our progress over the coming few weeks. 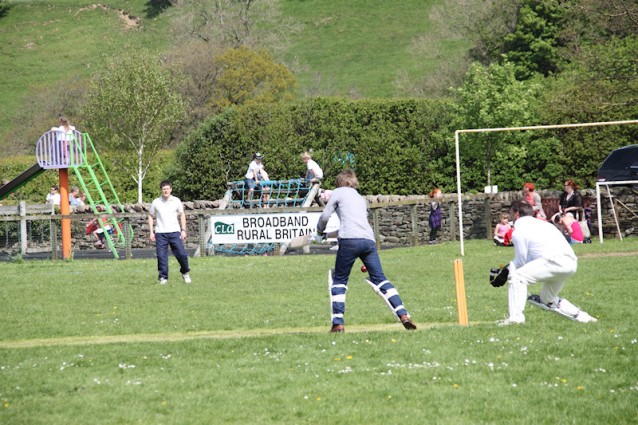 I am very pleased to announce that I will be working with the England & Wales Cricket Board (ECB) over the next couple of months to assist grassroots cricketers to make better use of social media to celebrate what they do, and, crucially, to reach out to what the ECB defines as “occasional” and “cameo” players (i.e. those with varying degrees of commitment to playing the game regularly), with a view to engaging them more fully in the activities of their clubs and leagues.

Participation in cricket is declining, and the key aim of this work is to try to address that by encouraging club cricketers to use social media in imaginative ways to raise the profile of the benefits of playing the game on a regular basis. 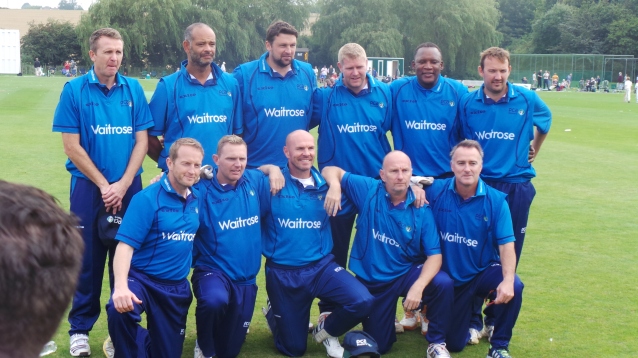 This is a pilot initiative, and during January and February, I will be running a programme of 3 evening workshops for club cricketers in each of the Bradford and Huddersfield areas. If this goes well, then there is a strong possibility of extending it into other areas. And the first session in each of the workshop programmes will be an informal discussion over a curry, an idea that I have unashamedly pinched from the Social Care Curry movement.

I am very excited about this, and also grateful to Twitter-friend Graham Hyde for mentioning my name to the ECB. I’ve been a cricket-nut since a small child and I am really happy to be able to combine my loves of cricket and social media. Watch this space for reports of progress.

It’s been more than 3 years since #Twicket, the world’s first live streamed village cricket match, but this Wednesday (3rd September), I am stepping back into the fray to live stream cricket again. This time I am working with Lincolnshire County Council’s Onlincolnshire broadband project to broadcast the PCA Masters v. the RAF game from Louth Cricket Club, which is one of a number of events that have been enhanced with technology to highlight the potential uses of better broadband.

This time there will be no Brenda and no Vicar’s Son, but there will be a number of big-name former international cricketers, including Graham Thorpe, Devon Malcolm, Steve Harmison and Dominic Cork. And we are gathering a cast of local characters to add to the online fun of the day.

The weather forecast is good, and my old friends at Rural Broadband are coming along to make sure we have a good connection. So, if you are anywhere near Louth on Wednesday, please join us, you might get on camera, or get the chance to do a bit of commentary. If you can’t make it, then please add to the fun on Twitter and other social media. We’re using the hashtag #LouthTWicket. And, of course, you’ll be able to watch the action live online at http://www.johnpophamlive.co.uk

Excitement is building for the beach-based social media event of the year.  And now, we can announce……

Subject to change (if we find something more fun to do) 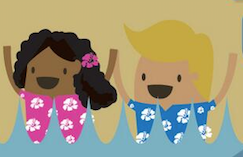 11am   Meet, share notes, and agree roles for the day.

11:30am Opening of the Social Media Surgery [Surgery will be open all day]

Tell us if you are coming http://smbeach.eventbrite.co.uk

Are you really, excited, you should be!  Here’s a taster

This event is sponsored by Coast and Country Housing 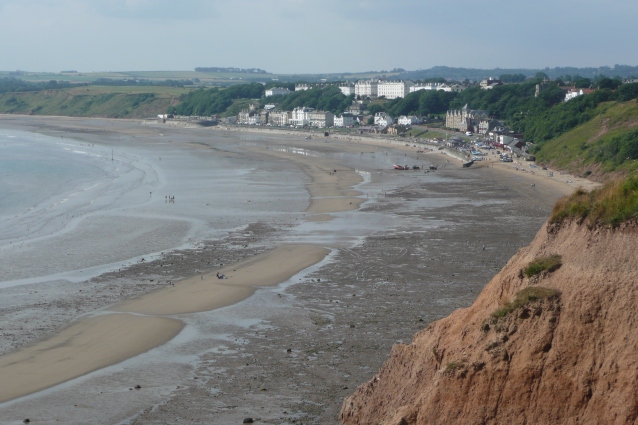 Join us on Filey Beach, or online on Saturday 16th August for an extravaganza of social media, digital inclusion, and general internet capers by the sea.

This is event is sponsored by Coast and Country Housing Limited.

Sun, Sea and Social Media is:

Join in the fun on Filey Beach any time between 11 and 5. Or follow the action online using the hashtag #smbeach with occasional live video at http://www.johnpophamlive.co.uk 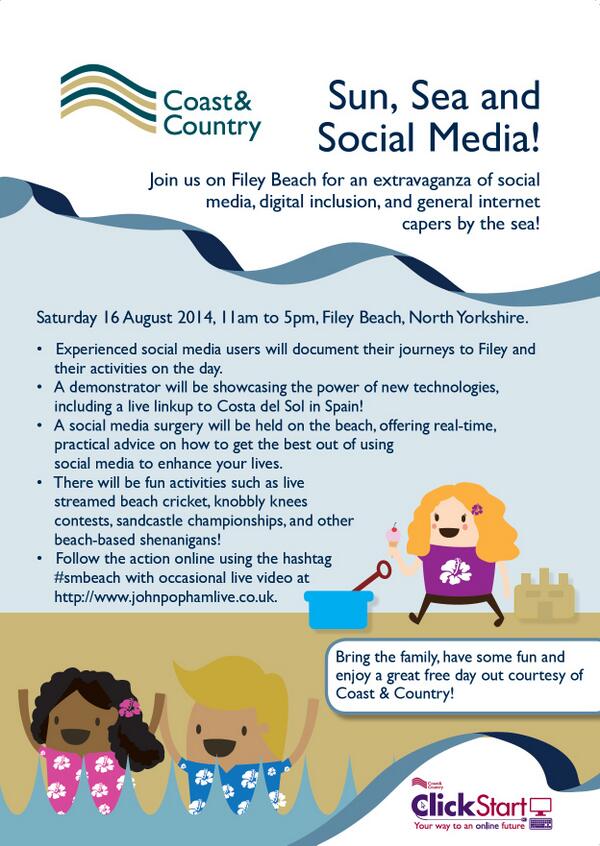 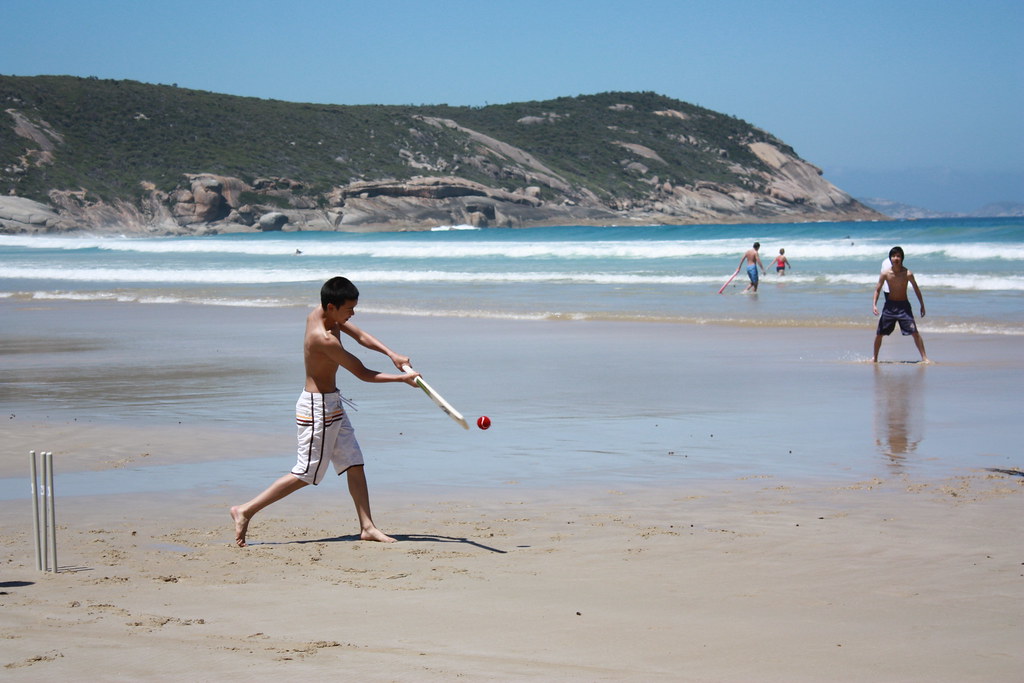 I first floated the idea of ebaywatch (title courtesy of Graham Richards) in April 2011. This year, I am determined to make it happen.

This is an outline of the event, for which I will be seeking sponsors. Please use the comments section below to add your ideas.

Ideas to build on this, below, please.

Some of the things I am passionate about:

If you connect with me on social media, I’m likely to talk about all of these things at some point, because work and social life tend to leak into each other. I hope you don’t have a problem with that.

What are you passionate about?