This is another in my series of interviews with older people on how they use technology. I am very grateful to Baeti Mothobi of Orbit Housing Group‘s Social Reporting Team for capturing this story for me. This is part of work commissioned by the Centre for Ageing Better.

Another in my series of interviews with older people on how they use new technologies. This is a piece of work commissioned by the Centre for Ageing Better. I’d like to thank Barbara’s daughter, Bridget Aherne, for arranging this interview.

Some of the things Barbara told me:

I’m banging on about storytelling again. Because I believe a momentous decision has just been made because slightly over half of the UK adult population believed a story. That story might be true. It might not. I very much doubt that all of it is true. Much of it might have its roots in truth. But….

You see, the Leave Campaign bus had a slogan on the side which said “We send £350m a week to the EU: Let’s spend that money on the NHS”. Nigel Farage made a speech in front of a poster saying “Let’s spend money on the NHS; not Brussels”. This morning he has said that nobody promised the EU money would be spent on the NHS. You see, not all stories are true. But some of them are powerful enough to make people believe in them.

I watched a TV programme recently about the guy who debunked Yuri Geller and several evangelical Faith Healers. Even though their methods were publicly shown to be fake, after a brief glitch in their popularity, most went on to resume their careers. People wanted to believe that what they were doing was real more than they wanted to believe the facts. The story won out over the reality.

So, in the face of myths, we have to tell the real story and we have to get people to want to believe the reality more than they want to believe the myth. People believe that all social housing tenants are cheating scroungers because of “Benefits Street” and the like. They believe that having any kind of ambition in life is setting yourself up for a fall because that is a recurring motif in TV Soap Operas.

So, some of the stories we have to tell, in ways that that engage people, are:

And those of us who believe in these ideas, or work in organisations whose existence depends on them, need to tell these stories ourselves. All the evidence suggests that no one else is going to do it for us.

I am passionate about the power of Digital Storytelling and I want to help all organisations and individuals to gain the skills and capabilities to tell their own stories to the world. If you share this objective, and just need a little help getting there, please get in touch.

Here’s another of my series of stories of how older people are using new technologies, for the Centre for Ageing Better. I captured this one unexpectedly at an event where I hadn’t taken my usual video kit with me, so it was done on my phone with no additional equipment. Sorry, therefore, for the background noise.

It’s about 3 years now since I first started calling myself a Digital Storyteller. I was far from the first to do so, but I’ve come across very few people who work largely in the non-profit sectors who do so. Most of the others who have adopted the title have been journalists or marketeers. My own evolution came about through a gradual realisation that the people I was training in using social media in the public and voluntary sectors were often failing to put their new skills into practice mainly because they thought they didn’t have a story to tell. So, I shifted my emphasis away from the physical mastery of the tools and towards helping people to find the stories they were going to use those tools to tell.

The non-profit sectors are still not taking full advantage, however, of the opportunities digital tools now give us to tell our stories. If you look at how the big brands do it, it is clear that they have always told stories, whether it be via TV advertising or otherwise, about why they should be part of your lives. It’s how good marketing works. And consider politicians. Their key aim is to tell a story about how they see everyone’s future, and to get voters to buy into that story enough to want to vote for them.

The past six years have been a struggle for many non-profit organisations, with Government-led austerity meaning that funding has been declining while, often, workloads have been expanding. But the cuts have not fallen evenly across the board, with some sectors being protected, and others even being successful in getting planned cuts reversed. This is because these sectors and organisations have greater public support. Like the brands, the public buys into their stories. On the other hand, the mainstream media has often been cheerleading moves to downgrade and cut funding to some sectors, by producing reality TV programmes which degrade and stereotype the people they support. Thus programmes such as “Benefits Street”, “Skint”, and “On Benefits and Proud” all contribute to the story in the public’s mind that certain groups are undeserving of public support and thus taxpayers’ money shouldn’t be spent on services that cater for them. Another case in point is how the EU Referendum debate has been dominated by issue of immigration. This has become the story to the exclusion of most of the remainder of the multitude of issues which the EU deals with.

But the fact is that, when the people actually understand what non-profit services do, their support for it increases. I often point to the case of Dave Throup, the Environment Agency Officer, who gathered a cult following on social media, at the same time that the Agency he worked for was getting a kicking in the media for failing to save the country from floods. This occurred because Dave was telling the story of the great work he was doing on the front line by tweeting about it. It is much easier to love passionate individuals, working hard to help people, than it is to embrace faceless, corporate entities like the Environment Agency. This is why it is so important for non-profit organisations (by which I mean public, voluntary and social enterprise organisations) to tell their stories. And there are three stories we should all be telling:

All of these insights into what organisations do can be vital in contributing to public perceptions of what we do. But perhaps the most important is the latter element. It is obviously in an individual’s interest to promote what they do, and in that of an organisation to present the best possible image. But, as the best brands have discovered, customer testimonials are the most powerful stories as they don’t have vested interests in being positive about the goods and services they receive. Client stories, therefore, need to be front and central of any digital storytelling strategy.

Social media has become central to millions of people’s lives. This trend shows no signs of abating, in fact, as demographics previously resistant to it recognise its value, it is reaching into new areas of society all the time. And people using social media are increasingly getting the majority of their news and information online. The big brands are all there competing for attention, and telling their stories to the world. But still, far too many non-profit organisations are leaving the field clear for mainstream media organisations and politicians to tell negative stories about what they do. Can you afford to let this situation continue? I think not.

If you would like me to help you with your organisation’s Digital Storytelling strategy, please get in touch. 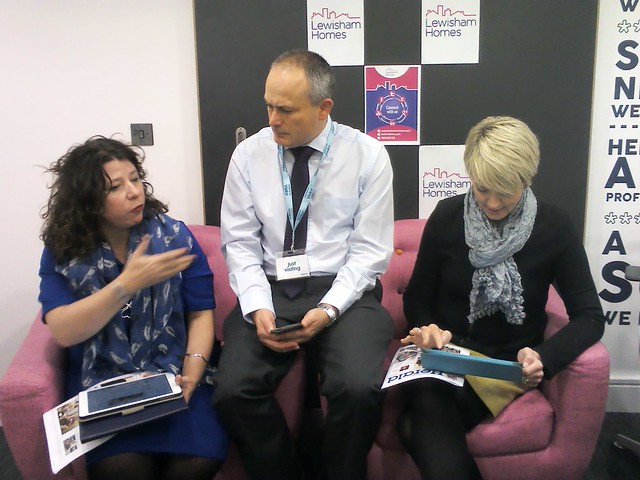 Can you believe that this year sees the fourth #HousingDay, the event which has now become a fixture in the annual calendar? #HousingDay is 24 hours when staff and tenants in social housing take to social media to celebrate their work, lives and communities. This year, the event is on the 19th September.

I’ve sort of made a tradition now of organising high profile stunts on the day designed to try to bring the world’s attention to the work that social housing is doing. In 2014 I did the #Housing Day Roadtrip, when I drove 800 miles visiting social landlords up and down England and Wales to highlight their great work, and in 2015, I did the #HousingDay NewsRoom when I was joined by some doyens of the social housing sector to live stream hourly news bulletins about what people were doing for the day.

This year I want to do something that is a little more ambitious. In fact, it might be a bit too ambitious, but I am putting the idea out there to see if there are any takers to help me make this happen.

One of problems that I think besets the social housing sector is that it is guilty of talking to itself rather than to the outside world. #HousingDay is, of course, an attempt to break out of that self-perpetuating bubble, and I think it does that to an extent, but not to anything like the extent that is necessary to make a real difference. And, by make a difference, I mean get widespread support for the sector such that it becomes impossible to impose damaging laws on it, starve it of resources, and make stereotyped TV programmes which demonise tenants. I think we are still a long way from a position where we might achieve these objectives.

2016 is the 50th Anniversary of the broadcasting of the TV programme “Cathy Come Home” the play that did so much to raise the profile of the housing crisis of the time, and which led to the founding of Shelter and many of the housing associations which exist today. That was a real breakthrough moment, and it is perhaps no coincidence that the current housing crisis has caused director Ken Loach to come out of his self-imposed retirement to produce a new film.

So, this is what I want to do on #HousingDay 2016. I want encourage people involved in social housing to organise Housing Film Shows, and I want these to happen in as many towns and cities as possible. I want “Cathy Come Home” to be on the bill of these shows, along with any other housing-related films people can think of. In fact, I want to challenge the social housing sector to make its own films about its work to show alongside “Cathy”. It would be great if each town and city could have its own unique film to show on the day.

But more than the film shows, I want this to be a major opportunity for the sector to talk to others outside its boundaries. I want everyone who organises a show to pack the audience with people who live and work in social housing, but I also want them to invite as VIP guests:

And I want organisers not to take “no” for an answer. I want us to move heaven and earth to get as many influential non-housing people there as possible, and I want each show to be a high-profile, media-friendly event.

Can we do this? Is it too ambitious? I hope not. Your comments welcome below. And get in touch if you want to help organise shows.