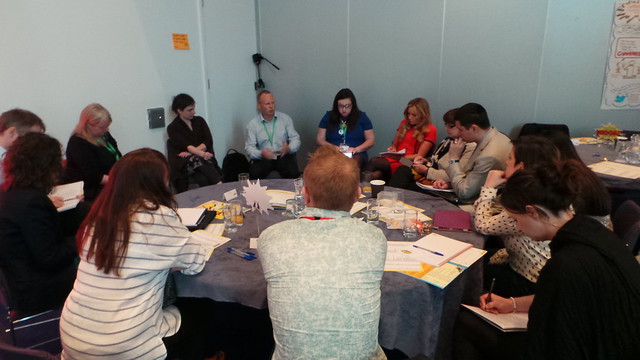 A few weeks ago I was delivering a social media training session to a group who were all older people (not the group in the photo).

Early in the session I went around the group and asked them to tell me about their experience of social media.  One man in the group said he had been using Facebook for a little while, but he was thinking of leaving. I asked why? He explained that he had recently met up with his daughter for the first time after a long period of being estranged from her. Following the meeting, his daughter had connected with him on Facebook, and had posted about how happy she was to be back in touch with her father. What followed was that a lot of other people liked that status, and a number commented on it. The group participant did not like this at all. He considered it an invasion of his privacy and suggested that these people should keep their noses out of his business.

My take on this is that those people were just saying “this makes me happy”. I likened it to a “digital smile”. He accepted this, and, indeed, I am pretty sure I was successful in completely changing his attitude to the whole incident.

This illustrates, for me, how we can never take other people’s reactions for granted. Something that we might take as a positive might be taken differently by somebody else. But, it also says something about how people who are not that familiar with new technologies and social media might be put off in the early stages. It highlights for me the challenges and potential benefits of social media for older people. I had a discussion with the whole group following this. One of the issues that came up was that, as people get older, their social circle diminishes, for a variety of reasons, including deaths of friends, and decreased mobility of themselves and others. In this context, social media can seem like a big challenge because it opens them up to a potentially huge range of contacts. That can seem daunting when you are not used to interacting with many people.

We hear a lot about how older people suffer from loneliness, and while I would never claim that online contact is a total substitute for face-to-face meetings, I firmly believe that social media can be a power means of combatting loneliness. We just need to get people to take those first steps.

2 thoughts on “What it means to be social”